Tory Brexit implodes and it’s back to the future. (opinion piece)

The UK Tory party has always been divided over Europe but in 2010 they found themselves with no overall majority and formed a coalition government with the Lib Dems. Earlier at the 2009 EU parliament elections, UKIP had come second winning 12 seats, the BNP won two. So it was against this background that in 2013, David Cameron made his Bloomberg speech.  To settle the matter once and for all within the Tory party and to see off an external challenge from the far right, Britain would renegotiate the terms of its EU membership and the result of that negotiation would be put in a plebiscite, the EU referendum of 2016.

As we all now know, the EU referendum had the unexpected outcome of a small majority in favour of Brexit. Cameron and chums resigned and the leadership of the Tory party shifted to the right wing of that party. These were the more ideological Tories. Gone were the old Etonians, although Boris Johnson was given the powerful position of Foreign Secretary. Theresa May (allegedly strong and stable) took the helm along with new blood from the backbench, ideological Tories with a taste for Grammar schools.

By 2015, the Tories had a weak majority but when May called a snap general election last year, that majority had vanished. The Tories, now propped up by the DUP,  set itself to the task of Brexit negotiations.  Meanwhile Jeremy Corbyn had consolidated his position as leader of the Labour party. The Labour manifesto of 2017 was probably the most radical since 1945.

Marx tells us in the 18th Brumaire: “men make their own history  but they do not make it as they please; they do not make it under self-selected circumstances, but under circumstances existing already, given and transmitted from the past. The tradition of all dead generations weighs like a nightmare on the brains of the living. And just as they seem to be occupied with revolutionizing themselves and things, creating something that did not exist before, precisely in such epochs of revolutionary crisis they anxiously conjure up the spirits of the past to their service, borrowing from them names, battle slogans, and costumes in order to present this new scene in world history in time-honored disguise and borrowed language”. 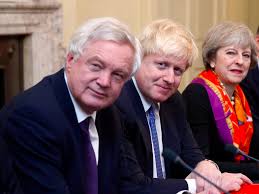 On the 9th of January 2018, David Davis, UK Brexit secretary together with his deputy make their own history by resigning. This is followed by the resignation of Boris Johnson, UK Foreign Secretary. The decisions of human beings are only made in human heads containing human brains but of course these decisions are not abstract, not isolated personal decisions in themselves, they are all dialectical points of rupture. In the old language of Marxism: quantity turning into quality.

Of course some will argue that these are not decisions at all, that these people are merely puppets and that there is some shady characters who are really pulling their strings.  Some Marxists will argue precisely this, when they should really know better. If however we follow events closely, these resignations shouldn’t really be surprising. Davis and Johnson have been resignations waiting to happen for months and there have been numerous shots fired by these two across the bows of PM May.

Another relevant quote from Marx, is one of the things he says in relation to Hegel’s Philosophy of Right: “It is not enough for thought to strive for realization, reality must itself strive towards thought”. To put this in other words, whatever is planned as an outcome must be constructed in the material world, it won’t happen merely by wishing it.

So here we have Theresa May, weighted down by advisers, some of whom will be expressing the concerns of industrial and finance capital. Industrial capital doesn’t want tariff barriers, finance capital wants easy access to victims (sorry I mean clients) for its financial services. None of these actors really cares about “British sovereignty” or “fears about immigration”. These are not business concerns, they are the concern of that special machinery of capitalism, the state, its politicians, its functionaries and ultimately its armed bodies of soldiers. But the British state never expected the outcome of the referendum which actually happened.  Those closely attached to the machinery of state want things to carry on as usual, for the Queen to continue to ride in the royal pram at state occasions.

The question on everyone’s lips is what happens next. Betting odds have narrowed sharply on there being a general election in 2018 but the Tories will be aware that Labour (also according to betting odds) is in front. But they may not be able to control the course of events. These leading Brexiteers may have cut off their nose to spite their face, since the May approach may well have or may well be rejected in Brussels. In which case they might have got, or might get their hard Brexit.

A Labour government would almost certainly go for a Norway like agreement but the Lib Dems with their money on a second referendum are still outsiders. There’s a small appetite for this but not a massive one. Furthermore a second referendum would not be a “negation of the negation”.  It would be fiercely fought and the last thing it would be fought on would be class lines. Irrespective of the outcome, it would further entrench right wing populism and immigrant scapegoating. It’s probably the worst possible solution to the problem because the proof of the pudding is in the eating, when the future as imagined becomes the present reality. It would be a purely ideological battle between entrenched camps with a possible Falklands factor fresh from the world cup.

With the Tory divisions now out in the open, it’s possible that the ideologues of Brexit will have their case examined and they will need to put flesh on the bones of how their “make Britain great again” vision actually looks like in the real world of rising and declining superpowers and global trade. It will be back to the future.

This entry was posted in Uncategorized. Bookmark the permalink.